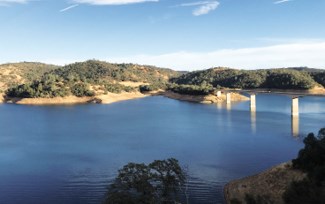 Now that the federal government has filed its own lawsuits against an unimpaired-flows plan for San Joaquin River tributaries, farmers and other parties to the lawsuits wait to learn where they will be heard–and prepare for a lengthy court battle.

(Left) Federal agencies that sued the State Water Resources Control Board over its unimpaired-flows plan for three Central California rivers say the plan would harm the agencies’ ability to manage New Melones Reservoir on the Stanislaus River, shown above in a file photo from October 2018.

The U.S. departments of Justice and Interior filed suits in both federal and state courts last week, against the plan finalized last December by the State Water Resources Control Board. The plan would redirect 30 to 50 percent of the flows in the Stanislaus, Tuolumne and Merced rivers in an attempt to increase fish populations.

According to the federal agencies’ complaint, the plan fails to comply with the California Environmental Quality Act and, once implemented, will impair the ability of the Interior Department to operate the New Melones Project on the Stanislaus River consistent with congressional directives for the project.

CFBF filed its own lawsuit against the unimpaired-flows plan in February, also charging the water board had failed to follow CEQA and had underestimated the harm the plan would cause to agricultural resources in the Central Valley.

“A number of our members are served ultimately by the federal projects on the river,” Scheuring said, “so in a certain sense (the federal agencies) are articulating some of the same interests.”

In their complaint, the federal agencies said the state had failed to comply with CEQA by not providing “an accurate, stable and finite project description,” by improperly masking potential environmental impacts of the amended plan and by failing to adequately analyze the plan’s impacts on water temperature, related water quality conditions and water supply.

Scheuring said the federal lawsuit makes many of the same points as the CFBF lawsuit, specifically “that the process was insufficient, inaccurate and ultimately misleading to the public.”

The federal agencies’ lawsuits further allege that the new flow objectives would significantly reduce the amount of water available in New Melones Reservoir for meeting congressionally authorized purposes of the project, including irrigation, municipal and industrial purposes, power generation and recreational opportunities. The lawsuit said reduced water available for New Melones Project purposes under the state plan would also impair delivery of water under contracts the U.S. Bureau of Reclamation holds with irrigation and water districts.

The Oakdale and South San Joaquin irrigation districts, which receive water supplies from the bureau as part of their pre-1914 water rights on the Stanislaus River—and which have also sued the state board—announced their support of the federal challenge to the flows plan.

“We have always believed the state water board was asserting too much control over a federal reservoir by dictating operations counter to federal intent,” OID General Manager Steve Knell said.

“Unfortunately, the state’s current plan does not offer a sustainable operation, nor balance the river’s complex water supply needs,” Rietkerk said. “The districts echo Interior’s concern about the impact of the state’s plan and hope a more balanced solution will emerge through the state’s voluntary settlement process.”

Since late last year, close to a dozen lawsuits have been filed challenging different aspects of the water board’s flows plan, filed by irrigation districts and urban water suppliers that depend on the three rivers, and by environmental and fishing groups that say the plan does not go far enough in redirecting water to fish.

Noting the “multiplicity of lawsuits,” CFBF attorney Scheuring described that as “an indicator of the scope of the state board’s action and how broad a swath of California is ultimately going to be affected by the flows plan.”

“We’re in company with a lot of other water users—urban as well as agricultural interests—so it shows you just how big this plan is,” he said.

Regarding next steps in the legal process, Scheuring said he expects there will be a coordination proceeding in the months ahead to determine whether the lawsuits should be combined into one proceeding, and where they would be heard.

“Obviously, each party who has filed a lawsuit is entitled to be heard in court, because they represent a constituency that is going to be affected by the plan,” he said, “but as a matter of judicial economy it is likely that all of the lawsuits will be put in one courtroom or another. In the coming months, we’ll be shaking out which courtroom it will be.”

Scheuring said he wouldn’t be surprised if the challenges to the state water board’s flows plan ultimately ended up before the California Supreme Court.

(Christine Souza is an assistant editor of Ag Alert. She may be contacted at csouza@cfbf.com.)
Reprinted with permission: California Farm Bureau Federation